Angular Getting started with Angular

Angular (commonly referred to as "Angular 2+" or "Angular 2") is a TypeScript-based open-source front-end web framework led by the Angular Team at Google and by a community of individuals and corporations to address all of the parts of the developer's workflow while building complex web applications. Angular is a complete rewrite from the same team that built AngularJS. ¹

The framework consists of several libraries, some of them core (@angular/core for example) and some optional (@angular/animations).

You write Angular applications by composing HTML templates with Angularized markup, writing component classes to manage those templates, adding application logic in services, and boxing components and services in modules.

Then you launch the app by bootstrapping the root module. Angular takes over, presenting your application content in a browser and responding to user interactions according to the instructions you've provided.

Arguably, the most fundamental part of developing Angular applications are the components. A component is the combination of an HTML template and a component class that controls a portion of the screen. Here is an example of a component that displays a simple string:

The selector property tells Angular to display the component inside a custom <my-app> tag in the index.html file.

index.html (inside the body tag)

The template property defines a message inside a <h1> header. The message starts with "Hello" and ends with {{name}}, which is an Angular interpolation binding expression. At runtime, Angular replaces {{name}} with the value of the component's name property. Interpolation binding is one of many Angular features you'll discover in this documentation. In the example, change the component class's name property from 'Angular' to 'World' and see what happens.

This example is written in TypeScript, a superset of JavaScript. Angular uses TypeScript because its types make it easy to support developer productivity with tooling. Additionally, almost all support is for TypeScript and so using plain JavaScript to write your application will be difficult. Writing Angular code in JavaScript is possible, however; this guide explains how.

More information on the architecture of Angular can be found here

Setting up the Development Environment

Before we get started, we have to setup our environment.

Open a terminal window (or Node.js command prompt in windows).

We create a new project and skeleton application using the command:

Here the ng is for Angular. We get a file structure something like this. 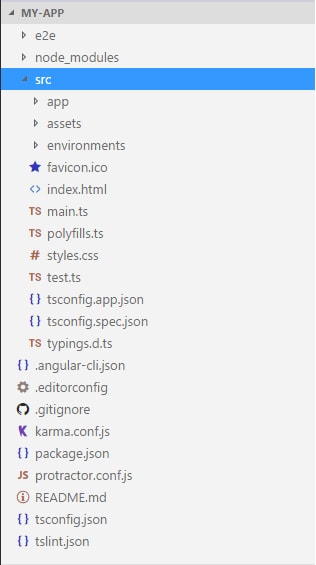 There are lots of files. We need not worry about all of them now.

We may use a flag -open ( or simply -o ) which will automatically open our browser on http://localhost:4200/

Navigate browser to the address http://localhost:4200/ . It looks something like this:

The CLI created the default Angular component for us. This is the root component and it is named app-root . One can find it in ./src/app/app.component.ts .

Open the component file and change the title property from Welcome to app!! to Hello World . The browser reloads automatically with the revised title. 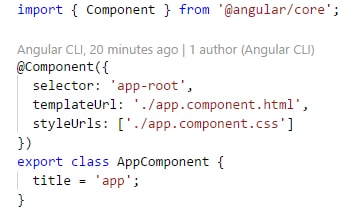 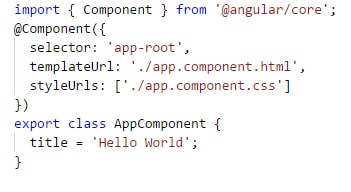 Similarly there is a change in ./src/app/app.component.html .

Notice that the value of title from the ./src/app/app.component.ts will be displayed. The browser reloads automatically when the changes are done. It looks something like this.

To find more on the topic, visit this link here.

This example is a quick setup of Angular and how to generate a quick example project.

Open a terminal and run the commands one by one:

To setup a new project

Navigate with the terminal to a folder where you want to set up the new project.

That is it, you now have a simple example project made with Angular. You can now navigate to the link displayed in terminal and see what it is running.

To add to an existing project

Navigate to the root of your current project.

This will add the necessary scaffolding to your project. The files will be created in the current directory so be sure to run this in an empty directory.

In order to see and interact with your application while it's running in the browser you must start a local development server hosting the files for your project.

If the server started successfully it should display an address at which the server is running. Usually is this:

Out of the box this local development server is hooked up with Hot Module Reloading, so any changes to the html, typescript, or css, will trigger the browser to be automatically reloaded (but can be disabled if desired).

There are several possible types of scaffolds angular-cli can generate:

You can also replace the type name by its first letter. For example:

When you are all finished building your Angular web app and you would like to install it on a web server like Apache Tomcat, all you need to do is run the build command either with or without the production flag set. Production will minifiy the code and optimize for a production setting.

Then look in the projects root directory for a /dist folder, which contains the build.

If you'd like the benefits of a smaller production bundle, you can also use Ahead-of-Time template compilation, which removes the template compiler from the final build:

Angular provides in-built unit testing, and every item created by angular-cli generates a basic unit test, that can be expended. The unit tests are written using jasmine, and executed through Karma. In order to start testing execute the following command:

This command will execute all the tests in the project, and will re-execute them every time a source file changes, whether it is a test or code from the application.