graphql Getting started with graphql

GraphQL is a query language for APIs and a runtime for fulfilling those queries with your existing data. GraphQL provides a complete and understandable description of the data in your API, gives clients the power to ask for exactly what they need and nothing more, makes it easier to evolve APIs over time, and enables powerful developer tools.

When should I use GraphQL?

GraphQL is intended to be the outward facing HTTP API for any kind of application but it is most powerful when the data is normalized with highly interconnected Collections|Tables|Nodes. The GraphQL Query Language (GQL) is designed to project interconnected data in a very intuitive and flexible way.

GraphQL itself is a Spec and is implemented by a number of different programming languages. These are the most popular supported languages

Running queries from the client side can be done with any HTTP client but client side libraries can be very beneficial.

Instead of defining URL endpoints for each data resource, in GraphQL you define a single endpoint that accepts GraphQL queries. Unlike traditional database query languages, GraphQL Query Language (GQL) is a projection of data returned by a root level query. The GraphQL schema will define the data model and root level queries and mutations. GQL executes those queries and defines what data to return.

Query for All Film Titles from Star Wars Schema 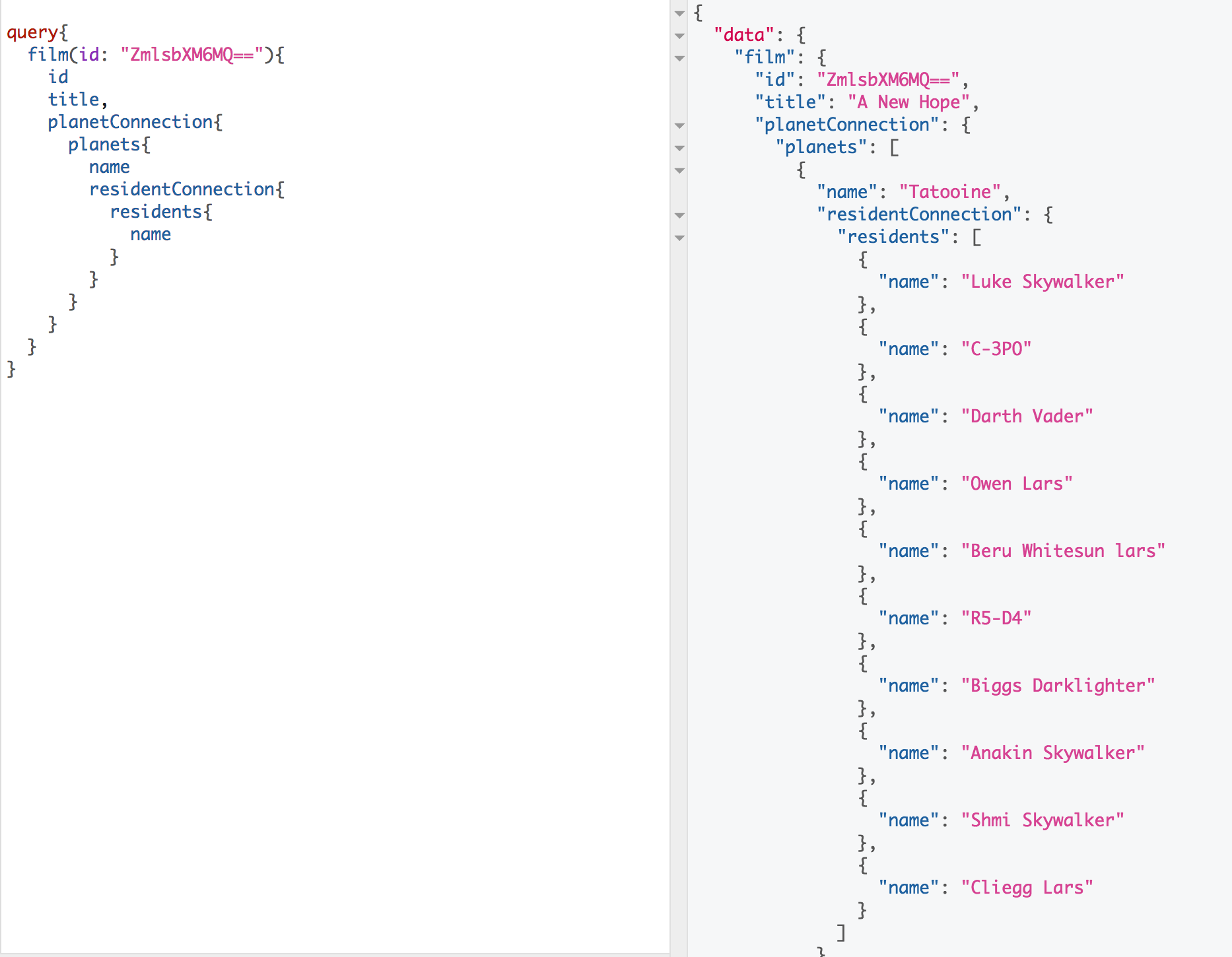 Notice how the root query film() takes in the id parameter of the film "A New Hope" and the projection from GQL returns the title, planets connected to the film, and then resident names of the planets. Check out the Star Wars GraphiQL site to experiment with querying in GraphQL.

In GraphQL the Schema defines the root execution queries and mutations as well as the types for your data.

The Person type has two fields, one is a standard Scalar type and the other represents a relationship to a list of other Person types that are 'friends'. Linking other types is what makes GraphQL so powerful. Now in GraphQL Query Language (GQL), the client can traverse the friends graph without any additional code or advanced querying.

The person query looks up a single person by it's id. This is the entry point to your data for clients using GQL.

Now that we have a Person type and a person root query we can look up a person and as many degrees of separation we want of the person's friends network.

GraphQL.js is a JavaScript reference implementation for GraphQL. You can install it via npm: