WinAPI (also known as Win32; officially called the Microsoft Windows API) is an application programming interface written in C by Microsoft to allow access to Windows features. The main components of the WinAPI are:

A Windows console application may have several slightly different interfaces for the main entry point provided by the programmer. The difference between these is whether the main entry point is the traditional int main (int argc, char *argv[]) or if it is the Windows specific version of int _tmain(int argc, _TCHAR* argv[]) which provides for wide characters in the application parameters. If you generate a Windows Win32 console application project using Visual Studio, the source generated will be the Windows specific version.

This example explains the Windows window (GUI) main entry point interface. To explore this topics you should have:

Create an empty Win32 windows (GUI, not console) project using the IDE. The project settings must be set for a window application (not a console application) in order for the linker to link with the correct Runtime. Create a main.c file adding it to the project and then type the following code:

This is our Win32 "Hello, world" program. The first step is to include the windows header files. The main header for all of Windows is windows.h , but there are others.

The WinMain is different from a standard int main() used with a console application. There are more parameters used in the interface and more importantly the main entry point for a window application uses a calling convention different from standard C/C++.

The next arguments to WinMain are as follows:

We don't use any of these arguments yet.

Inside of WinMain() , is a call to MessageBox() , which displays a simple dialog with a message, a message box. The first argument is the handle to the owner window. Since we don't have our own window yet, pass NULL . The second argument is the body text. The third argument is the caption, and the fourth argument contains the flags. When 0 is passed, a default message box is shown. The diagram below dissects the message box dialog. 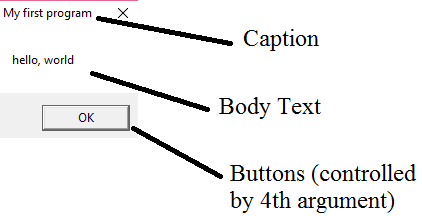 †On 32 bit systems only. Other architectures have different calling conventions.