Internally, all videos are a just series of pictures. Let's take a look at one such picture. 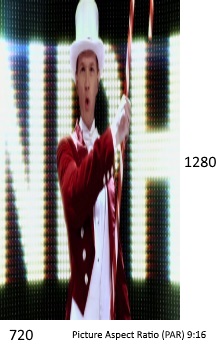 That looks odd, right? Indeed. The pictures that make up a video may have an aspect ratio that are different from the DAR, most often for algorithmic reasons (e.g. only sizes that are a multiple of 16 can be compressed by the chosen algorithm). This is called picture aspect ratio or PAR.

In this example, we have the picture dimensions exactly reversed between the displayed form (16:9) and the actual picture, so the PAR is 9:16. Normally, the differences are smaller but this example is exaggerated for clarity.