In this example we aim to accomplish one of the most common tasks: I have a small DC motor laying around, how do I use my Arduino to control it? Easy, with PWM and serial communication, using the function analogWrite() and the Serial library.

Pulse Width Modulation or PWM for short is a technique for mimicking analog signals using digital output. How does this work? Using a pulse train whose relation D (duty cycle) between time at high level (digital 1, usually 5V) and time at low level (digital 0, 0V) in each period can be modified to produce an average voltage between these two levels: 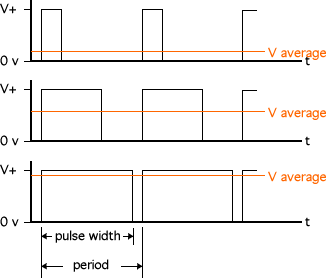 By using Arduino's analogWrite(pin,value) function we can vary the value of the duty cycle of pin's output. Note that the pin must be put into output mode and the value must be between 0 (0V) and 255 (5V). Any value in between will simulate a proportional intermediate analog output.

However, the purpose of analog signals is usually related to the control of mechanical systems that require more voltage and current than the Arduino board alone is capable of. In this example, we will learn how to amplify Arduino's PWM capabilities.

For this a MOSFET diode is used. In essence, this diode acts as a switch. It allows or interrupts the electric flow between its source and drain terminals. But instead of a mechanical switch, it features a third terminal called gate. A very small current (<1mA) will "open" this gate and allow the current to flow. This is very convenient, because we can send Arduino's PWM output to this gate, thereby creating another PWM pulse train with the same duty cycle through the MOSFET, which allows voltages and currents that would destroy the Arduino.

Bill of materials: what do you need to build this example

Here's an example of how this build looks. If you prefer an scheme here's one.

Now we can connect the Arduino to a computer, upload the code and control the motor, by sending values through the serial communication. Recall that these values should be integers between 0 and 255. The actual code of this example is very simple. An explanation is provided in each line.

And that's it! Now you can use Arduino's PWM capabilities to control applications that require analog signals even when the power requirements exceed the board's limits.