Here are some of the improvements in Preview 6.

Visual Basic users are used to enforce that their applications are single-instanced (one instance launched at a time).

You can see the result shown below. 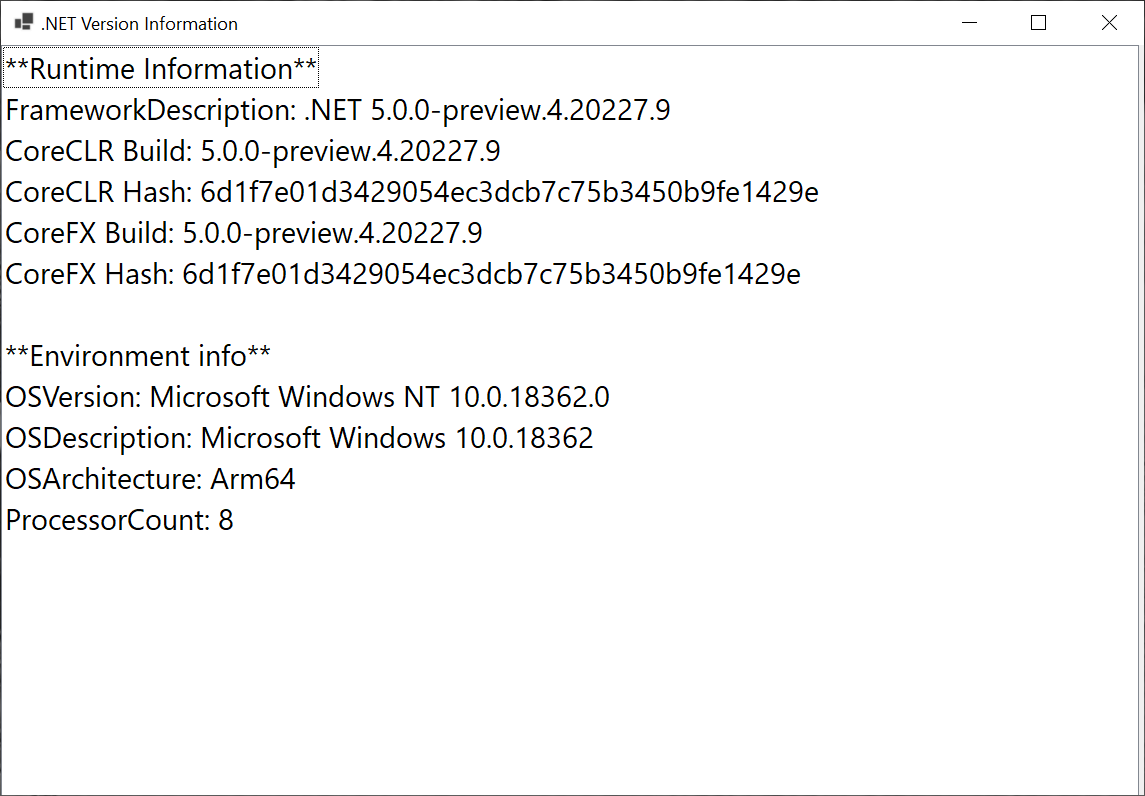 The RyuJIT team continues to add important improvements in each preview, specially with Preview 6. Let’s take a look:

The team has continuously improved the support of Single-File Apps in .NET 5. The goal was to enable publishing an app as one file for Windows, macOS, and Linux.

Over the years, you have seen a variety of hosting models for .NET in native applications. @rseanhall proposed and implemented a novel new model for doing that.

Windows Runtime (WinRT) is the technology and ABI that new APIs are exposed within Windows. You can call those APIs via .NET code, similar to how you would with C++.

The benefits are called out in Support WinRT APIs in .NET 5:

For more details, see the official docs issue at https://github.com/dotnet/docs/issues/18875.

The .NET 5 – Supported OS versions page is updated to capture the latest plans for platform support for .NET 5.0.

The package manager and container support aren't listed on that page. This information will be added before the release of .NET 5.0.

You can now easily read and write JSON data from an HttpRequest and HttpResponse using the new ReadFromJsonAsync and WriteAsJsonAsync extension methods.

The JSON extension methods can be combined with endpoint routing to create JSON APIs in a programming style we call route to code. It is a new option for developers who want to create basic JSON APIs in a lightweight way.

For example, a web app with only a handful of endpoints might choose to use a route to code rather than the full functionality of ASP.NET Core MVC.

Extension method to allow anonymous access to an endpoint

You can now allow anonymous access to an endpoint using the simpler AllowAnonymous extension method when using endpoint routing.

The default implementation remains the same, but a custom handler can be registered in DI allowing things like custom HTTP responses based on why authorization failed.

The following example demonstrates the usage of the IAuthorizationMiddlewareResultHandler.

You can read more about these Hub filters on the official documentation page.