Emacs's user interface uses terms that were coined early and can be unsettling to users used to a more modern terminology. 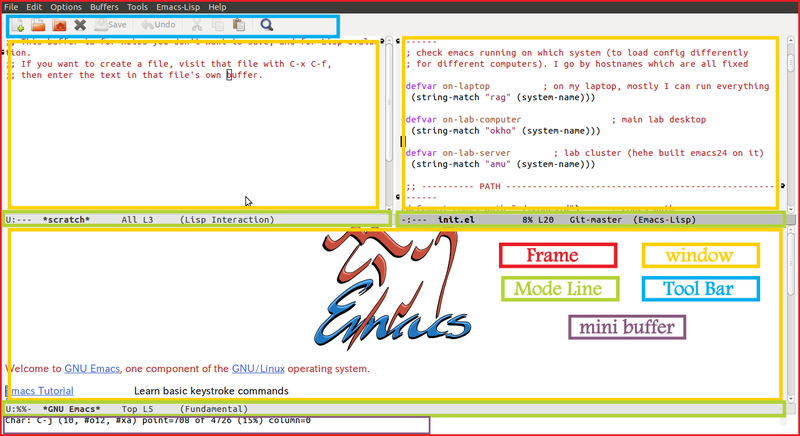 In Emacs, what is otherwise called a window (the area of the display used by a program) is called a frame. Emacs starts using one frame, though additional frames may be created using C-x 5.

A frame contains one or more windows (otherwise usually called panes), each showing the content of one buffer. Each frame usually starts with only one window, but additional windows can be created by splitting existing ones ; either horizontally using C-x 2 or vertically with C-x 3. See also Multiples windows or frames.

The term buffer refers to the content displayed in a window. Such content may reflect the content of a file in the file system (or maybe an updated version that has not been saved to the disk yet), but more generally it can be any kind of text.

At the bottom of each window is a mode line, which synthetically describes the buffer displayed in the window.

In a similar way to many other softwares, a tool bar can be displayed at the top of each frame. Its contents may vary depending on the type of buffer being currently edited.

A minibuffer, usually displayed at the bottom of each frame, allows interacting with Emacs. Each time a command asks for user input, it is prompted in the minibuffer. Conversely, messages displayed for the user to see are printed there.