Fortran originally was designed for a fixed format form based on an 80 column punched card: 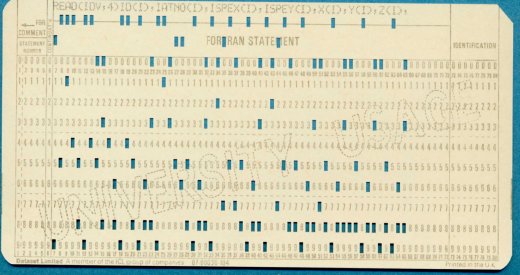 Yes: This is a line of the author's own code

These were created on a card punch machine, much like this: 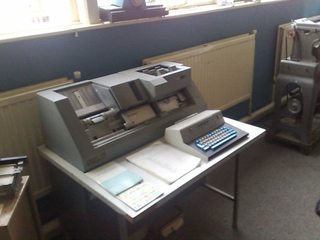 Images are original photography by the author

The format, as shown on the illustrated sample card, had the first five columns reserved for statement labels. The first column was used to denote comments by a letter C. The sixth column was used to denote a statement continuation (by inserting any character other than a zero '0'). The last 8 columns were used for card identification and sequencing, which was pretty valuable if you dropped your deck of cards on the floor! The character coding for punched cards had only a limited set of characters and was upper case only. As a result, Fortran programs looked like this:

The space character was also ignored everywhere, except inside a Hollerith character constant (as shown above). This meant that spaces could occur inside reserved words and constants, or completely missed out. This had the side effect of some rather misleading statements such as:

is an assignment to the variable DO1I whereas:

is actually a DO loop on the variable I.

Modern Fortran does not now required this fixed form of input and permits free form using any columns. Comments are now indicated by a ! which can also be appended to a statement line. Spaces are now not permitted anywhere and must be used as separators, much as in most other languages. The above program could be written in modern Fortran as:

Although the old-style continuation is no longer used, the above example illustrates that very long statements will still occur. Modern Fortran uses a & symbol at the end and beginning of the continuation. For example, we could write the above in a more readable form: