Variables hold data. Name them after what they're used for, not after their data type or scope, using a noun. If you feel compelled to number your variables (e.g. thing1, thing2, thing3), then consider using an appropriate data structure instead (e.g. an array, a Collection, or a Dictionary).

Names of variables that represent an iteratable set of values - e.g. an array, a Collection, a Dictionary, or a Range of cells, should be plural.

SHOUTY_SNAKE_CASE is commonly used to differentiate constants from variables:

However PascalCase names make cleaner-looking code and are just as good, given IntelliSense uses different icons for variables and constants: 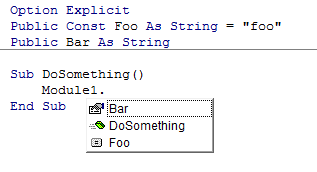 Name them after what they're used for, not after their data type or scope.

If you write your code such as procedures adhere to the Single Responsibility Principle (as it should), you should never be looking at a screenful of variable declarations at the top of any procedure; declare variables as close as possible to their first usage, and their data type will always be in plain sight if you declare them with an explicit type. The VBE's Ctrl+i shortcut can be used to display a variable's type in a tooltip, too.

What a variable is used for is much more useful information than its data type, especially in a language such as VBA which happily and implicitly converts a type into another as needed.

Consider iFile and strFile in this example:

strData is passed ByRef in the top example, but beside the fact that we're lucky enough to see that it's explicitly passed as such, there's no indication that strData is actually returned by the function.

The bottom example names it outContent; this out prefix is what Hungarian Notation was invented for: to help clarify what a variable is used for, in this case to clearly identify it as an "out" parameter.

This is useful, because IntelliSense by itself doesn't display ByRef, even when the parameter is explicitly passed by reference:

src and dst are Hungarian Notation prefixes here, and they convey useful information that cannot otherwise already be inferred from the parameter names or IntelliSense showing us the declared type.

Of course there's a better way to convey it all, using proper abstraction and real words that can be pronounced out loud and make sense - as a contrived example: