ActionScript 3 Working With Display Objects Introduction To The Display List

In AS3, display assets are not visible until they are added to the Display List.

The AIR/Flash runtime has a hierarchical display structure (parent child relationship where children can have their own children), with the stage being the top level parent.

To see the object in the example above, this (the context of the code) also must be on the display list, as well any parents it may have. In AS3, the stage is the top most parent.

Display objects can only have one parent. So if a child already has a parent, and you add it to another object, it will be removed from it's previous parent.

Let's say you replicated the code from the previous example so you had 3 circles:

Since the addChild method adds the child on top of everything else in the same parent, you'll get this result with the items layered in the same order you use addChild: 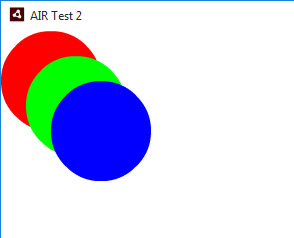 If you wanted a child layered different relative to it's siblings, you can use addChildAt. With addChildAt, you pass in another parameter that indicates the index (z-order) the child should be at. 0 being the bottom most position/layer. 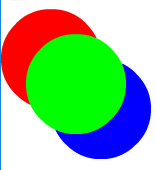 Now the blue circle is under it's siblings. If later on, you want to change the index of a child, you can use the setChildIndex method (on the child's parent).

This will rearrange the red circle so it's above everything else. The code above produces the exact same result as this.addChild(redCircle).

When a child is added to the display list, some events are fired on that child.

Conversely, there are also the remove events:

However, it's good to keep in mind that: