Adjacency list is a collection of unordered lists used to represent a finite graph. Each list describes the set of neighbors of a vertex in a graph. It takes less memory to store graphs.

Let's see a graph, and its adjacency matrix: 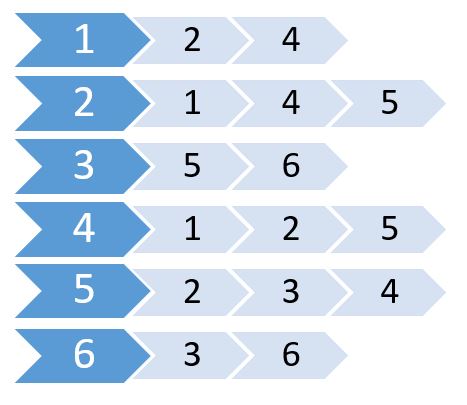 This is called adjacency list. It shows which nodes are connected to which nodes. We can store this information using a 2D array. But will cost us the same memory as Adjacency Matrix. Instead we are going to use dynamically allocated memory to store this one.

The pseudo-code will be:

From this one, we can easily find out the total number of nodes connected to any node, and what these nodes are. It takes less time than Adjacency Matrix. But if we needed to find out if there's an edge between u and v, it'd have been easier if we kept an adjacency matrix.