Go Getting started with Go

Go is an open-source, compiled, statically typed language in the tradition of Algol and C. It boasts features such as garbage collection, limited structural typing, memory safety features, and easy-to-use CSP-style concurrent programming.

The latest major version release is in bold below. Full release history can be found here.

Setting up the environment

If Go is not pre-installed in your system you can go to https://golang.org/dl/ and choose your platform to download and install Go.

To set up a basic Go development environment, only a few of the many environment variables that affect the behavior of the go tool (See: Listing Go Environment Variables for a full list) need to be set (generally in your shell's ~/.profile file, or equivalent on Unix-like OSs).

Like the system PATH environment variable, Go path is a : (; on Windows) delimited list of directories where Go will look for packages. The go get tool will also download packages to the first directory in this list.

The GOPATH is where Go will setup associated bin , pkg , and src folders needed for the workspace:

From Go 1.8 onwards, the GOPATH environment variable will have a default value if it is unset. It defaults to $HOME/go on Unix/Linux and %USERPROFILE%/go on Windows.

Some tools assume that GOPATH will contain a single directory.

The bin directory where go install and go get will place binaries after building main packages. Generally this is set to somewhere on the system PATH so that installed binaries can be run and discovered easily.

This is the location of your Go installation. It is used to find the standard libraries. It is very rare to have to set this variable as Go embeds the build path into the toolchain. Setting GOROOT is needed if the installation directory differs from the build directory (or the value set when building).

For full documentation, run the command:

For a tour of Go (highly recommended for beginners in the language):

The two commands above will start web-servers with documentation similar to what is found online here and here respectively.

For quick reference check from command-line, eg for fmt.Print:

Another example of "Hello World" style programs is FizzBuzz. This is one example of a FizzBuzz implementation. Very idiomatic Go in play here.

Place the following code into a file name hello.go :

When Go is installed correctly this program can be compiled and run like this:

Once you are happy with the code it can be compiled to an executable by running:

This will create an executable file appropriate for your operating system in the current directory, which you can then run with the following command:

Linux, OSX, and other Unix-like systems

Note: The Chinese characters are important because they demonstrate that Go strings are stored as read-only slices of bytes.

Environment variables that affect the go tool can be viewed via the go env [var ...] command:

By default it prints the list as a shell script; however, if one or more variable names are given as arguments, it prints the value of each named variable.

One little known Go tool is The Go Playground. If one wants to experiment with Go without downloading it, they can easily do so simply by . . .

The Go Playground also has tools for sharing; if a user presses the “Share” button, a link (like this one) will be generated that can be sent to other people to test and edit. 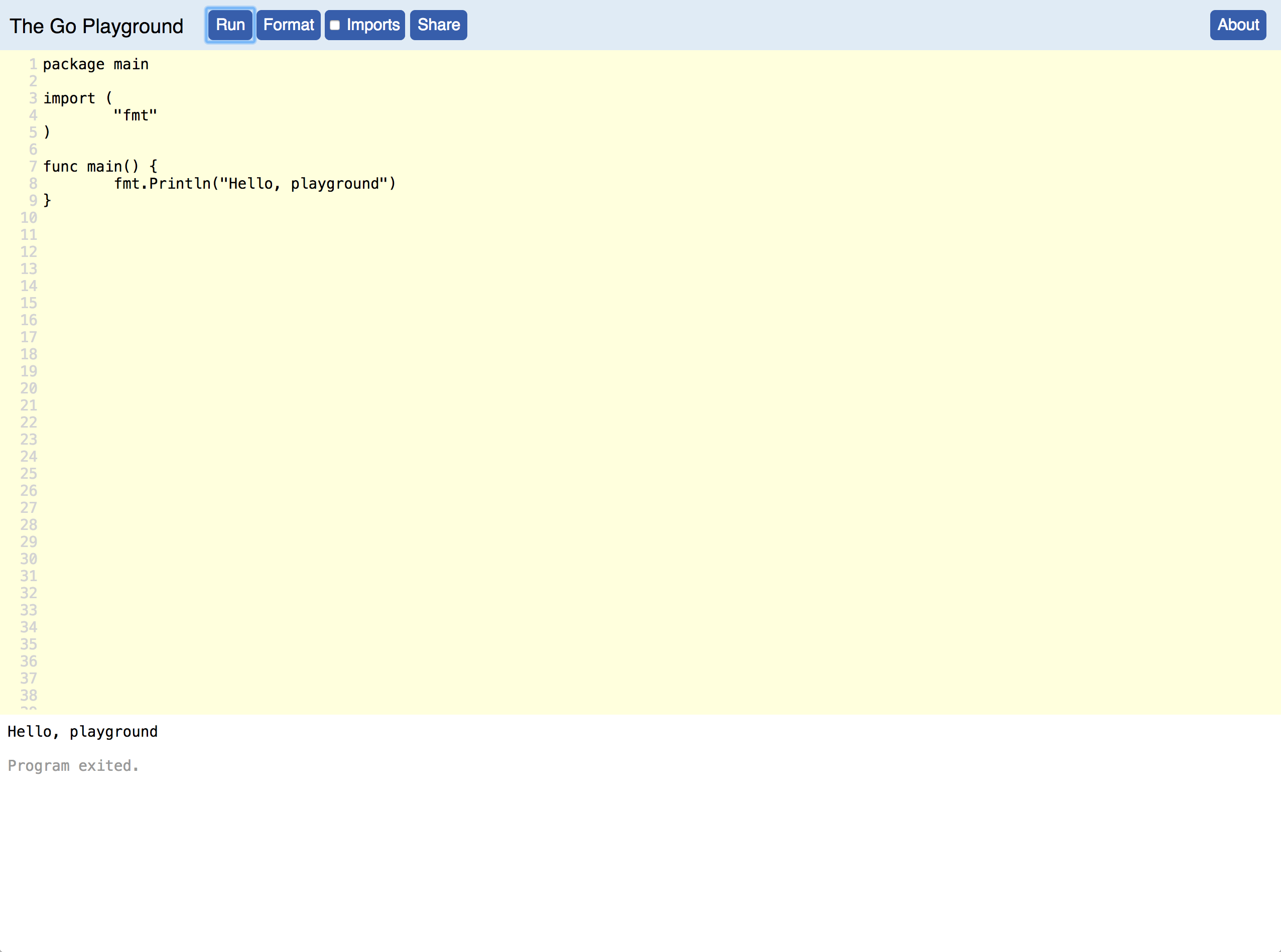