pandas Getting started with pandas

Pandas is a Python package providing fast, flexible, and expressive data structures designed to make working with “relational” or “labeled” data both easy and intuitive. It aims to be the fundamental high-level building block for doing practical, real world data analysis in Python.

The official Pandas documentation can be found here.

Note that since C is not a numerical column, it is excluded from the output.

In this case the method summarizes categorical data by number of observations, number of unique elements, mode, and frequency of the mode.

Once Pandas has been installed, you can check if it is is working properly by creating a dataset of randomly distributed values and plotting its histogram. 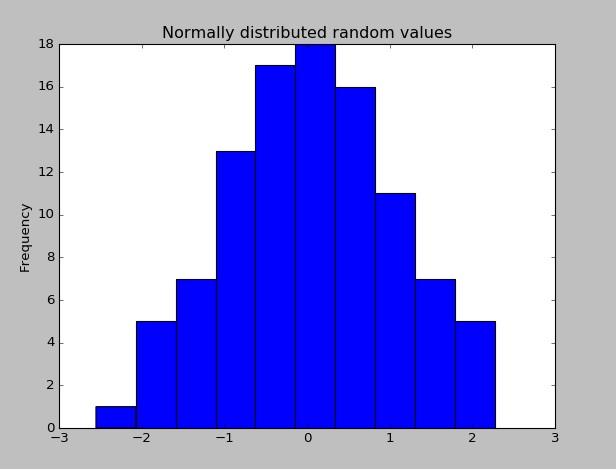 Check some of the data's statistics (mean, standard deviation, etc.)

First download anaconda from the Continuum site. Either via the graphical installer (Windows/OSX) or running a shell script (OSX/Linux). This includes pandas!

If you don't want the 150 packages conveniently bundled in anaconda, you can install miniconda. Either via the graphical installer (Windows) or shell script (OSX/Linux).

To update pandas to the latest version in anaconda or miniconda use:

Detailed instructions on getting pandas set up or installed can be found here in the official documentation.

Installing pandas and the rest of the NumPy and SciPy stack can be a little difficult for inexperienced users.

The simplest way to install not only pandas, but Python and the most popular packages that make up the SciPy stack (IPython, NumPy, Matplotlib, ...) is with Anaconda, a cross-platform (Linux, Mac OS X, Windows) Python distribution for data analytics and scientific computing.

Installation instructions for Anaconda can be found here.

A full list of the packages available as part of the Anaconda distribution can be found here.

An additional advantage of installing with Anaconda is that you don’t require admin rights to install it, it will install in the user’s home directory, and this also makes it trivial to delete Anaconda at a later date (just delete that folder).

The previous section outlined how to get pandas installed as part of the Anaconda distribution. However this approach means you will install well over one hundred packages and involves downloading the installer which is a few hundred megabytes in size.

If you want to have more control on which packages, or have a limited internet bandwidth, then installing pandas with Miniconda may be a better solution.

Miniconda allows you to create a minimal self contained Python installation, and then use the Conda command to install additional packages.

First you will need Conda to be installed and downloading and running the Miniconda will do this for you. The installer can be found here.

The next step is to create a new conda environment (these are analogous to a virtualenv but they also allow you to specify precisely which Python version to install also). Run the following commands from a terminal window:

This will create a minimal environment with only Python installed in it. To put your self inside this environment run:

On Windows the command is:

The final step required is to install pandas. This can be done with the following command:

To install a specific pandas version:

To install other packages, IPython for example:

To install the full Anaconda distribution:

If you require any packages that are available to pip but not conda, simply install pip, and use pip to install these packages:

Usually, you would install pandas with one of packet managers.

This will likely require the installation of a number of dependencies, including NumPy, will require a compiler to compile required bits of code, and can take a few minutes to complete.