Ruby is a multi-platform open-source, dynamic object-oriented interpreted language, designed to be simplistic and productive. It was created by Yukihiro Matsumoto (Matz) in 1995.

According to its creator, Ruby was influenced by Perl, Smalltalk, Eiffel, Ada, and Lisp. It supports multiple programming paradigms, including functional, object-oriented, and imperative. It also has a dynamic type system and automatic memory management.

This example assumes Ruby is installed.

Place the following in a file named hello.rb :

From the command line, type the following command to execute the Ruby code from the source file:

The output will be immediately displayed to the console. Ruby source files don't need to be compiled before being executed. The Ruby interpreter compiles and executes the Ruby file at runtime.

You can add an interpreter directive (shebang) to your script. Create a file called hello_world.rb which contains:

Give the script executable permissions. Here's how to do that in Unix:

Now you do not need to call the Ruby interpreter explicitly to run your script.

Alternatively, you can use the Interactive Ruby Shell (IRB) to immediately execute the Ruby statements you previously wrote in the Ruby file.

Start an IRB session by typing:

Then enter the following command:

This results in the following console output (including newline):

If you don't want to start a new line, you can use print :

Tk is the standard graphical user interface (GUI) for Ruby. It provides a cross-platform GUI for Ruby programs. 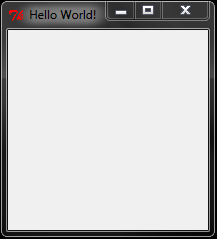 Define a widget with the title Hello World

Start the main loop and display the widget.

Run the command below in a shell after installing Ruby. This shows how you can execute simple Ruby programs without creating a Ruby file:

You can also feed a Ruby program to the interpreter's standard input. One way to do that is to use a here document in your shell command:

Place the following code inside the file:

Now, from a command line, execute the following:

The output should be: