SVG Getting started with SVG

SVG can also be embedded in HTML, in which case the xmlns attribute is not required.

Other graphical elements are:

CSS is used for styling although not all CSS properties apply to SVG and SVG itself defines some specific properties such as fill and stroke that are not used elsewhere.

Shapes can be filled with gradients or patterns and additional raster effects can be achieved using filters.

Clipping is available by using the above graphical elements as clip paths.

Regarding versions of the W3C SVG standard:

When using SVG inline, a DOCTYPE is not strictly required. Instead just the <svg> opening and closing tags together with either a viewBox or width and height attributes will suffice:

The <svg> fragment above acts as both a container and a structural element. This fragment establishes its own coordinate system.

Below is an example of rendering an SVG fragment with some content. It will produce a rectangle with "Hello World!" text within it. 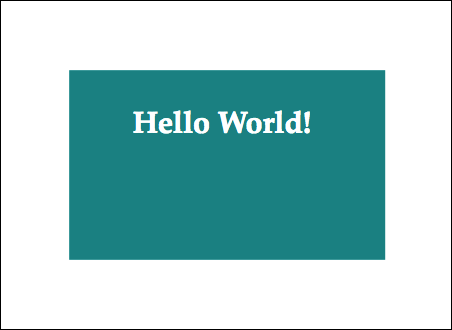 SVG as a background image

You can display an SVG file within an HTML document, by specifying it as a background image in CSS. For example:

If the dimensions specified in your SVG file are larger than the dimensions of your HTML element, it may be desirable to specify the background-size property, to scale the SVG to fit within its element.

As with using SVG as an <img> , it's worth noting some limitations with this approach:

You can render the contents of an SVG file as an image within an HTML document using an <img> tag. For example:

The dimensions of the image will, by default, display according to the width and height properties specified in the SVG file referenced in the src attribute.

It's worth noting various limitations inherent in this approach: