Digital hardware is built from two types of hardware primitives:

A digital hardware circuit is a combination of combinatorial logic and memory elements. Memory elements have several roles. One of them is to allow reusing the same combinatorial logic for several consecutive operations on different data. Circuits using this are frequently referred to as sequential circuits. The figure below shows an example of a sequential circuit that accumulates integer values using the same combinatorial adder, thanks to a rising-edge triggered register. It is also our first example of a block diagram.

Pipe-lining is another common use of memory elements and the basis of many micro-processor architectures. It aims at increasing the clock frequency of a circuit by splitting a complex processing in a succession of simpler operations, and at parallelizing the execution of several consecutive processing: 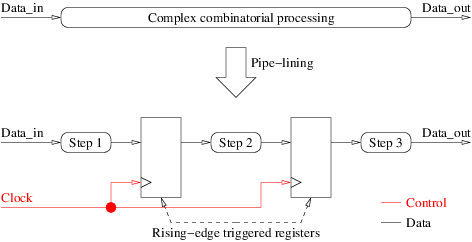 The block diagram is a graphical representation of the digital circuit. It helps making the right decisions and getting a good understanding of the overall structure before coding. It is the equivalent of the recommended preliminary analysis phases in many software design methods. Experienced designers frequently skip this design phase, at least for simple circuits. If you are a beginner in digital hardware design, however, and if you want to code a digital circuit in VHDL, adopting the 10 simple rules below to draw your block diagram should help you getting it right:

Do not forget to carefully check the last rule, it is as essential as the others but it may be a bit more difficult to verify.

Unless you absolutely need features that we excluded for now, like latches, multiple-clocks or signals with multiple drivers, you should easily draw a block diagram of your circuit that complies with the 10 rules. If not, the problem is probably with the circuit you want, not with VHDL or the logic synthesizer. And it probably means that the circuit you want is not digital hardware.

Applying the 10 rules to our example of a sequential circuit would lead to a block diagram like:

Our block diagram complies with the 10 rules. The Coding example will detail how to translate this type of block diagrams in VHDL.